In December 2021 Bolsover District Council planted the first of their one million trees at Fox Green, Creswell, as part of their Community Woodlands project. The site will have a total of 27,500 trees planted by March of 2024. Creswell is in the foreground of Bolsover District Council’s initiative to battle climate change with their £270,000 grant from the Woodland Trust. 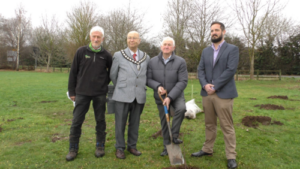 By Christmas 2021 1,000 tree whips will be planted around Fox Green, all of which have been funded by Robert Woodhead and supplied by Crowders Nurseries. It has been great for our team to be part of such a proactive and important project, fighting against climate change. At Crowders, we strive to positively contribute to the environment and participate in worthwhile projects.

Not only is Crowders produce being planted at Fox Green, but the project will also include the Welbeck Estate and the former Creswell Colliery site.

This project is striving to create new woodland areas and is also aiming to ‘increase resilience, repair and connect woodlands in the district.’

James Carter, Crowders Commercial Director, said: ‘This is such a great project for us to supply. As a Wholesale Nursery we are constantly aiming to positively contribute to the battle against climate change, so this project was a must. We look forward to watching the growth of these woodland areas and hearing about their positive impact.’